How many pringles could you fit into a 190g can?

So, I bought a can of Pringles and I remembered in the past, on the can it stated that it contained approximately 90 Pringles. Sure 90 sounds decent enough but I wanted to know how many you could fit in there if they were all perfectly fit, emphasis on the word perfectly. 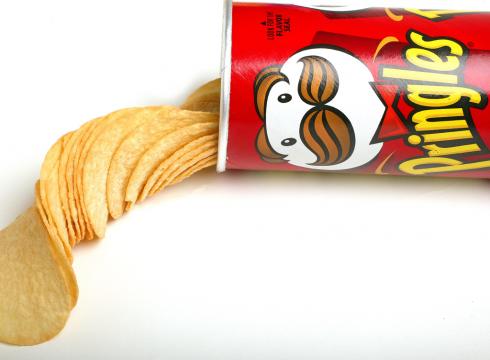 After I had nearly finished the Pringles I took the remaining few out so I could use them to find the volume and mass of each Pringle.
Each chip weighed 2g and finding the volume was a much more difficult procedure and with the equipment I had, it wasn't nearly as accurate as it could have been. We are all familiar with the shape of a Pringle and finding the volume of this shape would not be something that you could measure as easily as other shapes so I decided to measure the volume by displacement. This wasn't as easy as it sounded as Pringles float so this meant i would have to keep it submerged so that I could get a reading. The scale I had also wasn't that accurate and went up in 10cm^3. So I just decided to take 5cm^3 as the volume as I was getting nowhere and was running out of Pringles. Hopefully we are all familiar with the equation for density - D=Mass/Volume, so D=2g/5cm^3 which gave D to be 0.4g/cm^3. If you want it in the form of kg/m^3 then it would be 0.4kg/m^3

To find the amount that could fit into the 1105cm^3 I would have to divide the volume of the can by the density of a Pringle which would be 1105cm^3/0.4g/cm^3 which would give me 442 Pringles which does not sound right.

Imagine if there were 442 Pringles in each can, first of all you would have the hardest time you will ever have in your life taking them out one by one and they would probably all break, and secondly, this face wouldn't be anywhere near as happy as it is right now.